Why wait, come and discover our Jewish Route

Jewish Route in Portugal this itinerary is perfect for those who want to really know and understand the importance of the Jewish heritage in Portugal and in the Portuguese, from the roots of the country to the present day, especially in the Medieval period.

When Portugal was born in 1143, this minority was already widespread in some important localities, such as Santarem, which had the oldest synagogue with a growth of the Jewish population, favored by the need to populate the land conquered by the Moors, the synagogue being the seat of the Government of the commune.

In the fourteenth century each commune had one or more Jewish settlements, the rabbi had delegated his so-called ombudsmen to the principal Jewish centers of the country: Oporto (Between Douro and Minho Region); Tower of Moncorvo (Trás-os-Montes); Viseu (Beira); Covilhã (Beira / Serra da Estrela); Santarem (Extremadura); Evora (Alentejo) and Faro (Algarve), the ombudsmen exercised real jurisdiction over all national Jewish communities.

The synagogue was as important a place from the religious point of view (as it was the church for Christians) and civilian; Was a place of assembly and assembly of the members of the commune.

Mr. Aristides de Sousa Mendes a Portuguese consul who used his high position early in WWII to save Jewish people, he had granted visas to Jews despite having orders from Portuguese government (at the time a dictatorship) not to do it, difficult to tell but it’s estimated that he helped saving up to 10 000 Jews, discover everything at our Jewish Route in Portugal.

Transfer from the airport

Our Jewish Route in Portugal, begins with your arrival at the airport, on the way to your accommodation we will give you some useful information about the city such as restaurants or other interesting places next to the Hotel.
1ºDay – Lisbon 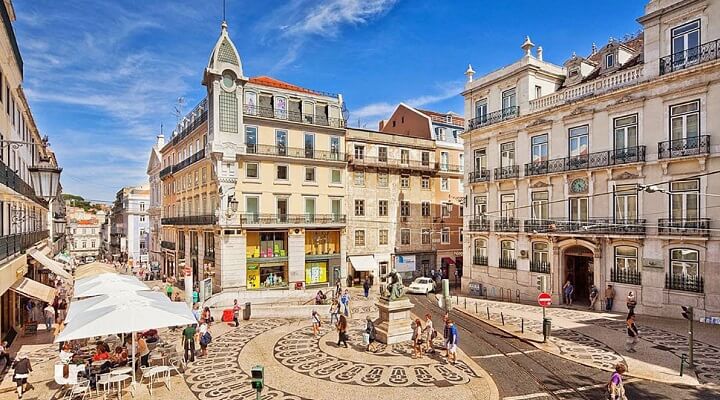 We will start in Lisbon, where we will visit the former Judiciary in Alfama quarter, São Domingos square, the Synagogue between other places of touristic interest such as: the historical Bairros ( Quarters ) of Lisbon; Bairro Alto, Chiado, Baixa, Alfama. Visit to the Nations Park, where in 1998 Lisbon received the Expo 98 and understand how eclectic Lisbon can be.

Time then to visit Belem monuments, reliving the memories of the Portuguese golden age to Torre de Belém, Padrao dos Descobrimentos, at last but not less important, the famous Pasteis de Belem, a custard egg tart, that only can be found here. 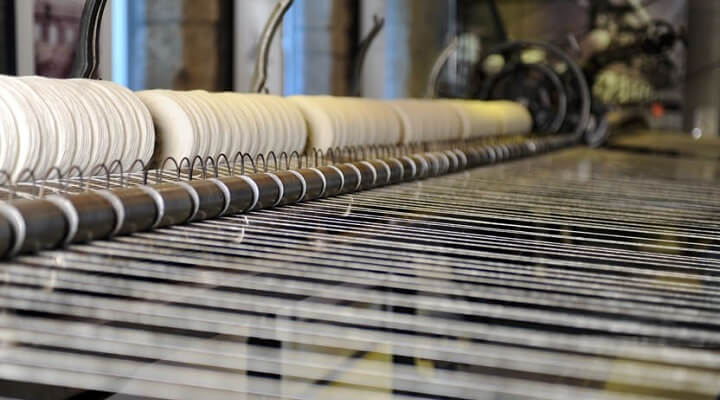 We will leave Lisbon towards Tomar where we will visit the century-old synagogue, coeval of the few Jewish temples built during the Jewish presence in Portugal’s early times followed by the expulsion to which they were subjected by King Manuel I.

The synagogue, built between 1430 and 1460, is a quadrangular building, with 9.50 meters deep by 8.25 meters wide. Continuing our route we reach Castelo Branco, here we find references to the existence of a Jewish community and its Jewish quarter going back to the end of the fourteenth century On the “Casa da Memória Judaica” in Castelo Branco, located at Rua das Olarias, a visit to the museum is a must.

Divided into different areas portraying the presence of Judaica in the city, as well as distinguishing some personalities such as Amato Lusitano or Afonso de Paiva. Countless sailors from the epic of sea discoveries and Portuguese expansion in the world were born here in Covilha and Jewish heritage, such was the case of Pero da Covilha, explorer and architect of the future sea route to India, or Joao Ramalho first pioneer in Brazil.

Entrances to the convent of Christ in Tomar 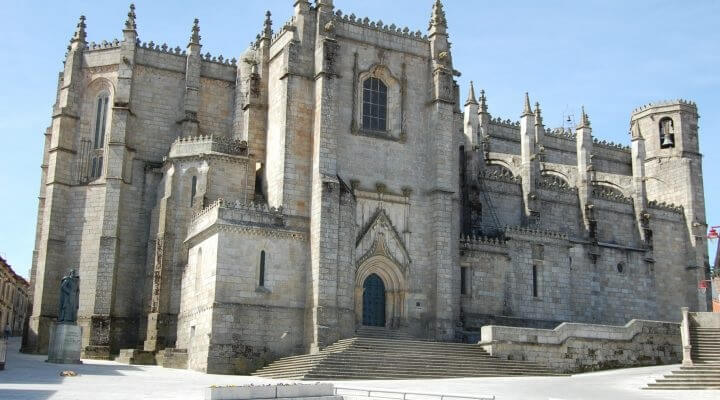 We begin this third day of our Jewish Route in Portugal on our way to Belmonte.

This important village holds one of the oldest and most important communities of Portuguese Sephardic Jews. When the Church of St. Francis was tore down, in Largo Antonio Jose de Almeida, in 1910, a stone of the first synagogue of Belmonte dated 1297 was found, this fact allowed us to conclude that at the time the Jewish community had indeed a strong presence.

Visit to the Synagogue and the Jewish Museum. Continuing we will reach the city of Guarda where again the Jewish community was over long periods one of the most important in the country and also considered to be one of the oldest.

Tickets at the Jewish Museum in Belmonte 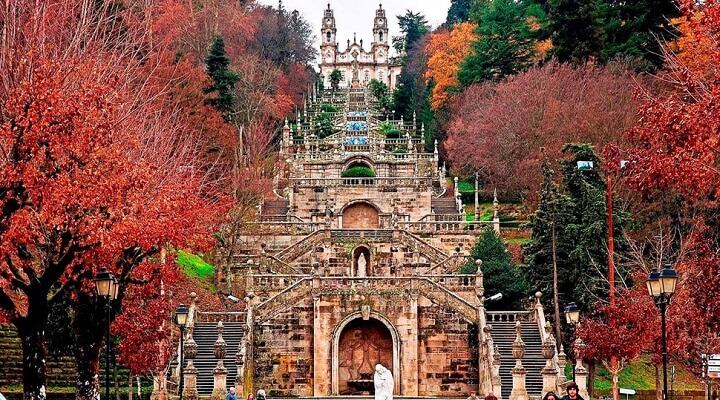 We start our day visiting Lamego, since the 14th century Jews inhabited this commercially active city of Lamego, lived in the area between the castle and the church of Saint Mary of Almacave.

In the 15th century there were already two Jewish neighborhoods. The oldest Jewish quarter , was located near the ” Porta do sol”.This day of our Jewish Route in Portugal, will brings us to  one of the major tourist attractions in the country, the Douro Valley, where you can get acquainted with one of the most important Portuguese products: the Port wine.

Here we will visit wineries and taste some wines. Leaving the Douro Valley, via Amarante, where in the early nineteenth century, Napoleon Bonaparte’s troops, during the French invasions, were held, during the heroic episode of Defense Amarante Bridge, delaying them enough time, for the city of Oporto prepare better its defense.

After this episode, plans for reconstruction of the village were made, since the French had almost burned down all the houses. 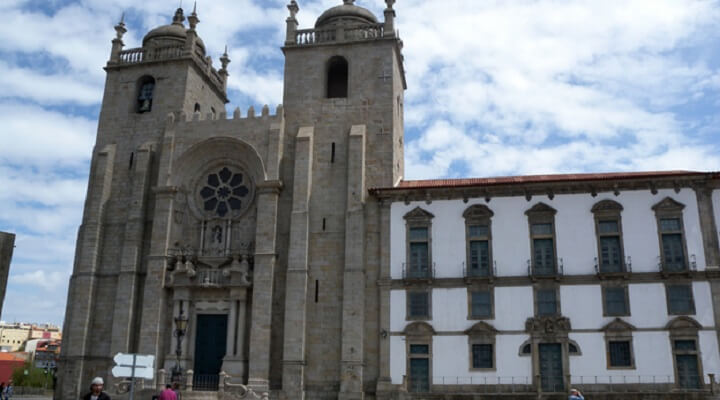 The city of Porto (Oporto in English), which since the beginning of the Portuguese nationality had many Jewish quarters, saw John I, king of Portugal in 1386, order the concentration the Jewish in the Olival neighborhood, within the medieval walls.

The synagogue was located at the site of the current convent of S. Bento da Vitoria. In the city we will visit the above mentioned area and its beautiful synagogue, along with all the highlights, including the Lello Bookstore, as well as a visit and wine tasting at one of the many Port wine cellars.

Boat trip in the Douro river 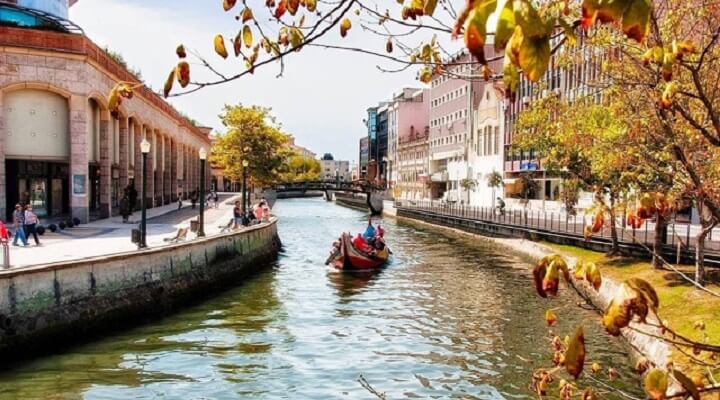 Leaving Oporto to the Portuguese Venice !!! … AVEIRO, with its beautiful canals, here we can do a boat ride in a Moliceiro (typical boats which conducted the transportation of seaweed used as manure in agriculture fields).

Time for tasting the famous “Ovos Moles”, a delicious local pastry, egg made, visit the salt mines, which continue to be the main source of income for many local families.

We will stop for lunch (time permitting) at one of the most typical fishing villages in Portugal, Nazare, this beautiful town has been famous for its fresh seafood restaurants, for the “ladies of the seven skirts” and nowadays for its giant beach waves. We follow route in direction of Obidos one of the most charming walled cities in Europe.

Transfer to the airport 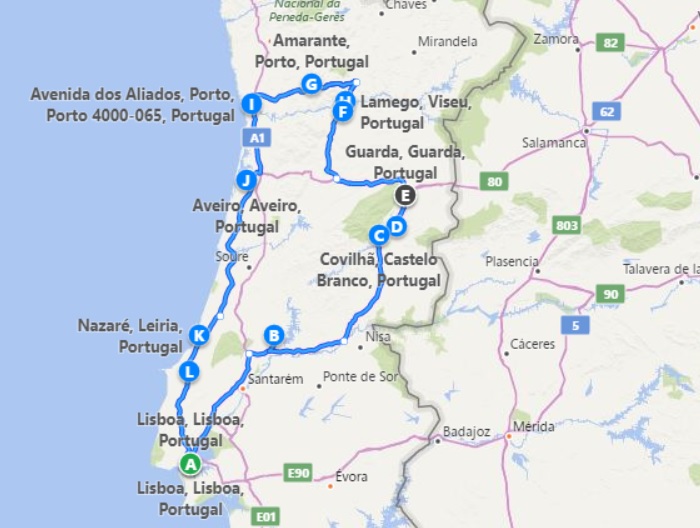