A must our 2 Days Tour in Lisbon, the perfect itinerary for you, who have two free days in Lisbon but you aren’t sure how to use it. We suggest to spent your two days between Lisbon, Sintra, Fatima, Obidos and much more …

On the 1st of November of 1755, Lisbon was hit by a great earthquake wist a magnitude of 8. in the richter, nobody knows how many people died in the meantime it is approximately 30 thousand people died.

The city was practically destroyed, the difficult mission of reconstruction was the responsibility of the Prime Minister, Mr. Sebastiao Jose de Carvalho e Melo, better known as Marquês de Pombal, who with the help of internationally renowned architects designed a new downtown, modern, with neoclassical architecture.

Where its wider streets, tall buildings and more resistant materials, fearing a new earthquake. Avenida da Liberdade the Lisbon icon that initially would serve as a public park reminds us  Champs-Élysées in Paris with international stores and the most expensive square feet in Portugal and one of the most expensive in Europe.

Another important date in Portugal it´s the 25th of April 1974,  on this day a military coup overthrew the dictatorship of the Estado Novo, a fascist period where Salazar’s image feared even the most courageous, the military coup was carried out by the MFA (Movimento das das Armed Forces) becoming internationally known for the Carnation Revolution, because during the celebration the population offered red carnations to the military, who put them in the barrels of their shotguns.

Come meet Lisbon, do it in our 2 days tour in Lisbon.

Our 2 days tour in Lisbon begins with your arrival in Lisbon, we will welcome you to the airport and on the way we will give you some tips about the city as well as restaurants or other interesting places next to the Hotel.
1ºDay – Lisbon and Sintra Tour 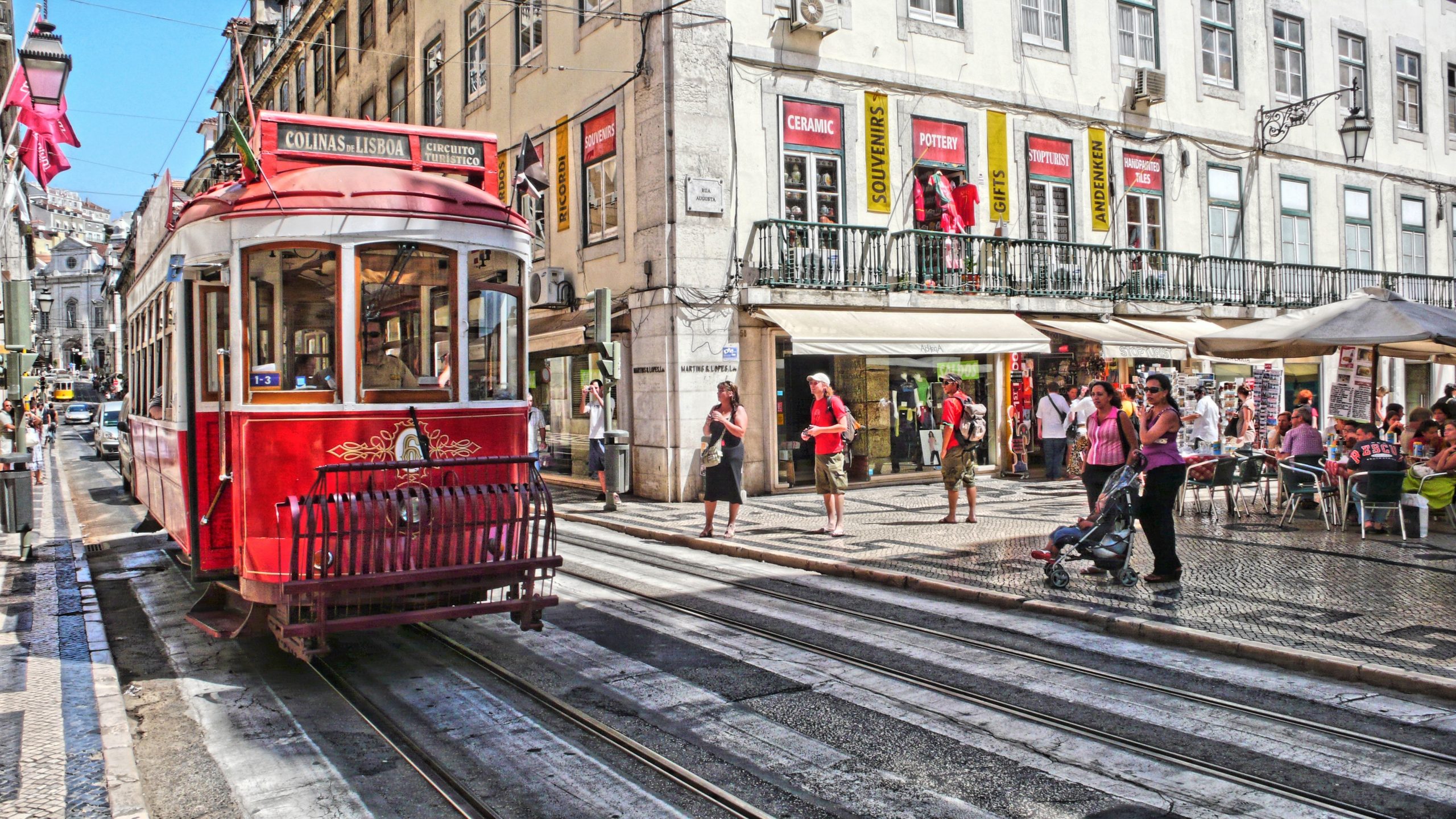 On the first day of our tour, we start with a visit to Lisbon, Alfama the oldest part of Lisbon, with its alleys and alleys, an old Arabian Medina.

In Baixa de Lisboa the most devastated neighborhood with the great earthquake we will understand the importance of Pombaline architecture, with buildings reconstructed in a completely different way, a wider area with many streets and squares, this already foreseeing a another earthquake, crossing Avenida da Liberdade until we reach Marquês de Pombal square where we will stop by Parque Eduardo VII and try to understand the relationship and treaties between Portugal and England.

We then proceed to Sintra, we suggest a visit to the Queluz Palace the palace where the Portuguese Royal family was living when Portugal was Invaded by Napoleon, who “forced” them to move the capital to Brazil, where was born Dom Pedro IV of Portugal , who at the same time was Dom Pedro I of Brazil. With a Rococo style where its fantastic uneven gardens stand out, well disguised by the sequence of terraces and galleries with Tuscan columns, topped by a monumental staircase.

The center of Sintra, with its alleys where countless Portuguese handicraft stores await you, as well as the famous local pastry  “Travesseiro de Sintra”, free time to enjoy this wonderful place.

If your Palace option to visit is not the Queluz then can visit one of Sintra’s many options, among them;

Arriving at Cabo da Roca (westernmost point of the European continent), we will visit these important places where the 165 meter high lighthouse built in 1772, demonstrates the importance of this place.

The village of Cascais a beautiful bay with plenty of small fishing boats, the place chosen by the Portuguese royal family for holidays that ended up dragging all the nobility, free time to explore this small village, that attracts thousands every year.

Always flanking the sea and after a brief visit to Estoril, we arrive at Belem, the place that best describes the period of Portuguese maritime expansion, from which courageous Portuguese explorers came out in the 15th century discovering the sea routes to India, Africa and Brazil, commemorating this glorious past, financed by the vast wealth that flowed to Portugal from the colonies.

Here we will then visit its three important monuments; The Belem Tower, Jeronimos Monastery and the Discovers Monument, the last stop will be in the famous Belem pastry factory to taste this fabulous conventual egg custard tart that attracts millions every year. 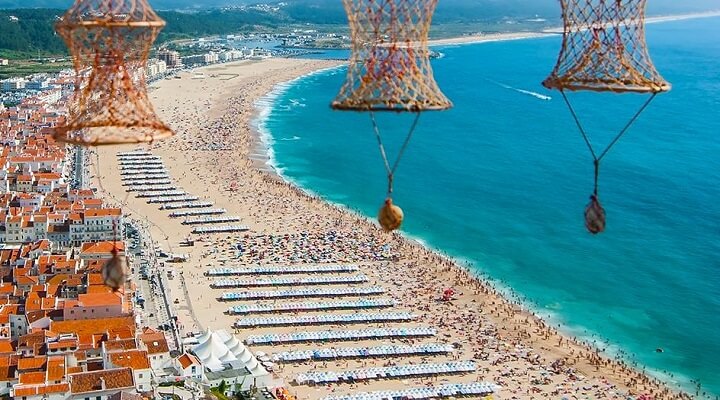 Considered by millions to be one of the most important Marian Shrines in the world, the Shrine of Fatima, leaves no one indifferent, here we will pay homage to our Lady, visiting the two Basilicas, Basilica of Our Lady of the White Rosary built in 1928 with neo-baroque architecture.

Here you will find the tombs of the three shepherds  (Francisco and Jacinta), and  the tomb of Sister Lucia, who died in 2005 and Basilica of the Holy Trinity built in 2007 with more than 8,000 places and 40,000 m² of area designed by the Greek architect Alexandros Tombazis, without forgetting the Chapel of the Apparitions, the first Chapel to be built right after the apparitions.

We continue our day to the Monastery of Batalha, the best example of Gothic architecture in Portugal, built in the 14th century we hope with this visit to understand the importance of this battle in the independence of Portugal over the Spanish.

In Nazare  one of the most charismatic fishing villages in Portugal, where fish are still dried on the beach, and where the tradition of the “seven skirts” ladies remains. Today Nazare is also known for its giant waves, when in 2013 the American surfer McNamara broke the world record by surfing a wave of about 30 meters.

Time now to visit Obidos where we will travel back in time to medieval times, explore its beautiful and narrow whitewashed streets, still used in the Templars period as a defensive pentagon of the five Castles, until it was used as a wedding gift from D. Dinis to his wife D. Isabel, making Obidos part of Casa das Rainhas.

In Obidos we will try the famous cherry liqueur in a chocolate cup, curious?

Of course, your 2 days tour in Lisbon will only be complete with the transfer back to the Lisbon airport that is included in this itinerary. 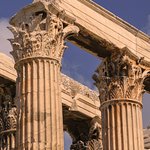 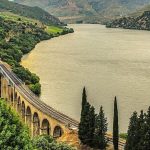